My Journey to Blood Donation

I remember when I was about 9 or 10 years old my father coming home late for dinner one day.  He had his sleeve rolled up and a big bandage on his arm. I asked him what happened and he said a little boy from the neighborhood where he worked had leukemia and he donated bone marrow to him to help him get better.  Sadly, I already knew what leukemia was: one of my cousins had died from it when I was in 3rd grade when she just four years old.  The last time I had seen her she had recently had her little head shaved and was wearing some type of shower cap.  She was running around and playing that day so when my mom told me she had died about a year later, I clearly remember locking myself in the upstairs bathroom of our house and crying.

So my reaction to the news that my dad had donated bone marrow was to ask “Is he going to die like Lisa?” My dad, who was used to some difficult questions from me (my favorite: “Do flies get married by fly priests?”) told me he would get better.  I don’t remember if the little boy got better or not.  And I don’t even know if he didn’t get better if my father would have told me because he didn’t want to upset me.  But what I held onto from that day was that my dad tried to save someone’s life.  When I was a little older, my mom’s aunt was sick in the hospital and needed blood and my father was her blood type.  He went in and donated to her.  In fact, she needed it a few more times and eventually she told him that he had become her actual nephew because she had so much of his blood in her body.  From then on he got called frequently to donate blood.  I would see the messages my mom took for him on the fridge that it was time to donate.  I asked him why he did it so much.  Couldn’t someone else give their blood? I was afraid they would take too much and he would get sick. He said, and I remember his exact words, “Maybe my blood will save someone’s life this time, you never know.” I thought my dad was so brave to get blood removed from his body and give it to someone.  I had no idea how the process worked. My dad said they put a tube in his arm and the blood went into the tube. He never said it hurt but I somehow thought it was terribly painful to remove the blood and put it into another person.  I envisioned him lying on a table with a giant hose pulling blood from his body and getting slurped out and pumped right into the person on the other bed who was waiting for it.  I pictured him squeezing his face tight from the pain and the other person smiling as his body filled up with the nice, new blood.  And I didn’t want any part of it.

Fast forward to 2008.  I had never donated bone marrow, or blood for that matter. I had had enough blood drawn when I was pregnant to know that I never wanted to have a pint of blood taken from me. One nurse had collapsed my vein, another one had missed a vein, it hurt, and because I was pregnant,  the drama was magnified each time.  Nope.  No blood donation for me. I still had the image I had conjured up in my brain from childhood about how blood donation worked.

But in 2008 the Eagles were at training camp at Lehigh University and they were sponsoring a blood drive. They needed 1,200 donors. Anyone who donated got FREE EAGLES GEAR and could get VIP passes to get on the field that day. As soon as I found out, I went on line and signed up. I didn’t think about being afraid or squeamish. And I didn’t give it a second thought until that day.  I just wanted the gear and to get on the field. I got the family on board, dressed in our Eagles gear, and we set off.  I had hydrated, eaten my leafy greens and was so nervous I was shaking.  My daughters, then 7 and 12, stayed with me while I was on the table and held my hand. The older one was fascinated by the process. The younger one distracted me with her chatter.  I couldn’t look at the tube or the bag, I knew I would get sick if I did. But ten minutes after the needle went in, I was finished.  I had done it.  I was so proud of myself.  At the snack area, three people around us fainted within minutes of each other.  My kids were scared, and I was hoping I wasn’t next.  I made out without passing out- SUCCESS! I was so wrapped up in the blood donating that I never got over to the field. I called my dad when I got home and told him I had donated blood. I hadn’t said anything before in case I chickened out. He  congratulated me and said he was shocked but very happy, even if my reasons weren’t purely humanitarian.

I donated a few times since then when there was a special need or there was a local blood drive, but not with any regularity.  But in June the position of Red Cross Club advisor at my school became available. When I read the email I heard a voice inside my head (not one of my usual ones) and it just said “Do it.” I don’t know if it was my conscience, or my father, or the voice from my habit of biting off more than I can chew, but I typed “I’ll do it.” and hit SEND within seconds of reading the email.  I am no stranger to organizing community service events and it is very rewarding to work with students who believe in helping out people in need.  So, I was looking forward to it.

The club’s two biggest events are blood drives. Our first one was yesterday. We had a goal set for us to sign up 74 people.  Sign ups were slow. I started to worry.  Previous years’ turnouts were great so I didn’t want to be the advisor whose club’s drive didn’t get enough sign-ups and let the Red Cross down- that blood was crucial to the local blood supply. The hospitals were down to 4 days’ worth on the shelves. Death and destruction from the three hurricanes motivated people to donate in September and the supplies increased a bit. Then the horrific shootings in Las Vegas happened and adults who I had previously tried to encourage to donate but were too scared now decided to sign up.  Our numbers climbed, and in the midst of this, news that our local Red Cross had rushed 400 pints of blood to Las Vegas suddenly made the tragedy more personal. The images of people lying in blood were everywhere and the students couldn’t escape them. That tragedy and news of the 6 to 8 hour long lines to donate blood in Vegas touched a lot of our students.

By yesterday morning we had to turn students away who walked in to donate. The turnout was beyond my expectations. Our new principal was the first one on the table, cementing her new title of “leader.” I had signed up but was afraid if I donated and something happened to me I wouldn’t be able to supervise.  But how could I recruit all of these people and then not put my money where my mouth is? Or my tourniquet where my arm is.  I’m no hypocrite. Anyway… I donated without incident before the crowd showed up.  Seven more teachers and staff took time out of their jam-packed schedules to donate. Twenty of my own students had signed up and I felt so proud. A number of students had to be deferred (iron levels, medications, piercings, etc) so not everyone who signed up was able to give blood, but what touched me was the bravery of the kids who did it. They just stuck their arm out and filled the bag while they Snap Chatted with the other arm. Like it was nothing. My teenage self, with a father who had a frequent bleeder card (as I called it) and set that wonderful example for me to emulate, would have never done that.  Right then I wish I could have smacked my teenage self in the head. 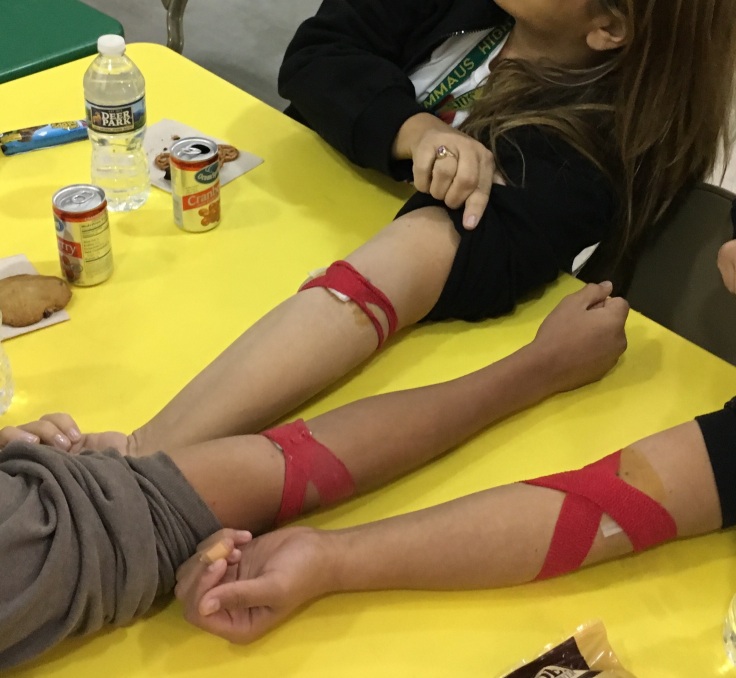 When I asked some of the students why they decided to do it, most of them just said “It’s a good thing to do.” Just like that. It made me think of Gussie. Just matter of fact, no overthinking, just something he needed to do. Someone needs blood?  He had some.  Bone marrow- here you go.  I got goosebumps several times yesterday watching 16 and 17 year olds do something so grown-up and selfless, but the most goosebump-inducing moment came during the last minutes of the drive.  A student who I didn’t know had just successfully donated.  He was eating his snacks and suddenly grabbed a trashcan and got violently sick. I called the EMT over and he tended to him until he felt better. He had broken out in a sweat and the color drained from his face. I thought “well, that’s a heck of a way to associate your first blood donation.” I surely wouldn’t do it again if I knew I had to publicly and violently vomit afterwards. But a few minutes later I went back over to check on him. Still pale as a ghost, he said he was fine and asked me when the next blood drive was.

Want to save a life? Find a donation center near you HERE.

2 thoughts on “My Journey to Blood Donation”